Rice is the second most produced cereal in the world , behind corn, and contributes very effectively to the caloric intake of the current human diet. In general terms, “it is characterized as a good source of carbohydrates in the form of starch (amylose and amylopectin), being 70-80%, so it has a considerable energy contribution , being the main source of energy for many populations ”, Says Roland Garroz, dietitian-nutritionist and Project Manager of the Official College of Dietitians and Nutritionists of the Valencian Community (Codinucova) .

On the other hand, it contains a discrete amount of protein that is around 7%, being deficient in some essential amino acids such as lysine (common characteristic of cereals, although within them, it is the one that provides more lysine). In addition, it does not contain gluten so it is suitable for the consumption of people with celiac disease or non-celiac gluten intolerance. Naturally, it includes appreciable amounts of dietary fiber , thiamine or vitamin B1, riboflavin or vitamin B2, and niacin or vitamin B3, as well as phosphorus and potassium .

However, Garroz recalls that, “due to the usual industrial processing for refining and polishing, more than half of its mineral content and practically all (almost 90%) of the B vitamins and fiber are lost, leaving become a food especially energy. Hence the reason for recommending the consumption of brown rice, which conserves most of the grain, including bran and germ (the parts of the grain that contain the most fiber, vitamins, minerals and some vegetable oils). ”

Regarding rice varieties, there are many ways to classify rice, by its shape or size, by the content of aromas, color or touch, or by the industrial process to which it has been subjected prior to packaging.

Valencia as a gateway for cultivation in Spain

Rice is a cereal from the Oryza sativa plant , considered basic in the feeding of many cultures, highlighting the Asian, Latin American and Spanish populations, especially in the Levante region. The origin of the rice plant is not known exactly and there is controversy between China and India as regions where the cultivation of this one originated. Despite this, Garroz says, it is known that the first crops appear in China 5,000 years a. C. and Thailand 4,500 a. C., then expand to Cambodia, Vietnam and southern India. However, it is thought that its cultivation began around 7,000 years ago.

In Spain, it is considered that the gateway to its cultivation was Valencia and its introduction is attributed to the Arabs during the eighth century. Within the Valencian Community, the region of Sueca and the lands near the Albufera of Valencia are the oldest and most traditional.

As a general rule, rice is cooked with wet cooking methods, specifically boiled in water, steamed or baked. Each region, culture or even family, has its own cooking techniques , according to the characteristics of the dish you want to make and the variety of rice to be used.

Why is it advisable to take white rice in the soft diet?

Theoretically, a soft diet is one in which the patient is offered foods that are naturally easy to chew – or that after the cooking process acquire this soft consistency; that provide a small amount of fiber (especially insoluble), fibrous and fatty tissues; besides avoiding offering very elaborate preparations, spiced or with sauces rich in fats. Therefore, simple, under-elaborated cooking methods are preferred, in wet cooking, boiled, cooked or stewed, and in papillote. The goal is to facilitate chewing, swallowing, digestion and nutrient absorption.

“Rice as food, specifically white rice , meets these requirements, since it is practically free of fiber and fat, it is also rich in amylose – which is a very digestible starch fraction , which when cooked behaves like a gel , giving cooked white rice its peculiar soft, lumpy or sticky consistency. All this makes it a food very well tolerated by people with some digestive disorder or in the period of reintroduction of oral feeding after a relevant surgical intervention ”, explains Garroz.

However, warns the dietitian-nutritionist, his systematic use in therapeutic diets for patients with certain pathologies is associated more with recommendations based on clinical practice than with conclusive evidence on its benefits against other cereals or grains, as energy sources, Nutrients and good tolerance. 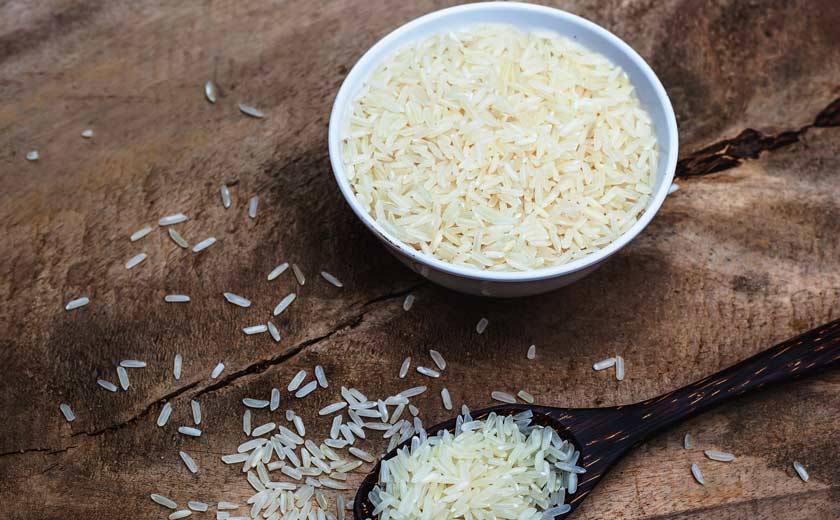 Steamed rice, also called parboiled rice, is the one that has been removed bran by water in a light cooking of around 60 ° C. This type of rice has some advantages over white, because it retains some vitamins, minerals and bran fiber, which are lost in traditional polishing. In the precooked (vaporized) process, rice starch undergoes a “gelatinization” process, generating a starch “resistant” to digestion, which is why properties are attributed to lower blood glucose levels.

However, the Codinucova expert points out that scientific evidence has not been able to demonstrate health benefits derived from consuming steamed rice compared to taking white rice, and the contribution of vitamins, minerals and higher fiber is not significant if both are compared. with whole grain rice or “whole grain”. Therefore, the decision to consume it must obey technical-culinary, cultural or personal tastes. As a curiosity: this treatment is traditional in India and Pakistan.

How long can it be stored in the pantry or in the fridge?

On the conservation of rice, it is necessary to distinguish between dry uncooked rice and cooked rice:

Dry rice: depending on the variety to which it belongs, it can last from 18 to 24 months, as long as a series of storage recommendations are followed. The main thing is to avoid storing rice in places with excessive heat or humidity , since these are the ideal conditions for its properties to be altered. In addition, it is recommended to store it in a closed, dry container that is away from heat sources, or even in airtight containers inside the refrigerator.

Cooked rice: when this food is reheated it is a dangerous source of bacteria (mainly Bacillus cereus ) and becomes a potential source of food poisoning that must be carefully monitored. International organizations dedicated to food safety recommend eating rice immediately after cooking and if it is to be stored for later days, it should be done avoiding the shortest possible exposure to room temperature and with special emphasis on hot climates.

It is advised that no more than two hours pass between the end of cooking and refrigeration. Once the heat of cooking has been lost, it must be stored in an airtight container, always handling with clean utensils and kept at a cooling temperature (below 5ºC) for a period of one to three days (the European Information Council on Food recommends keeping cooked rice for a maximum of one day). The reason is that rice contains cooking resistant spores that can lead to bacterial growth even at refrigeration temperatures.

To consume it again, the portion to be served must be heated (temperatures greater than 72ºC for at least two minutes), leaving the rest in the container in the refrigerator. Once the recommended storage period has elapsed orwhen it is suspected that the rice is in bad condition (sticky or changes in color or smell aspect), this should be discarded immediately .

Can cooked rice be frozen? How?

Although it is not included in the food safety recommendations, there is the possibility of freezing cooked rice for storage and having it available for later consumption. Storing raw or cooked foods (in good condition) at freezing temperatures (below -18ºC) allows them to be kept in adequate hygienic and safe conditions for a longer time. If this freezing is prolonged for periods longer than three months, the food can suffer organoleptic, palatability and quality alterations.

The Codinucova member then summarizes the preservation conditions of frozen cooked rice : “Place the rice in an airtight container, paper film or freezer bags (cold burn is avoided in this way), preferably in sizes corresponding to individual portions It is recommended to freeze only dried rice preparations, since if it contains a lot of liquid, it will lose properties and will not be very pleasant for consumption when reheated. If you want to freeze creamy or broth rice, it is advisable to extract as much liquid as possible and keep it in another separate container. It is also important to introduce the rice into the container once it has lost the cooking temperature. ”

To defrost, it is recommended to place the portion of rice to be consumed in the refrigerator from the previous night, introduce the portion in a zip bag and let stand for half an hour in a bowl with hot water, use the microwave with short times of two minutes in defrost power (defrost function) and in several batches or, simply, add directly to cooking if you want to include in another cooked preparation.

As Garroz emphasizes, these recommendations are based on consumer experiences , and at no time respond to indications based on research or positioning of health authorities in food safety.